What Does ‘The Incredibles 2’ Have To Do With Migraines Or Seizures? What Does ‘The Incredibles 2’ Have To Do With Migraines Or Seizures?

HEALTH ALERT I haven’t seen this mentioned in a lot of places, but the new Incredibles 2 movie (#incredibles2) is filled with tons of strobe/flashing lights that can cause issues for people with epilepsy, migraines, and chronic illness. This thread is spoiler free

Lewis was concerned that scenes in the sequel to the 2005 Oscar-winning The Incredibles may be too flashy. But not in a bling-bling, nouveau riche type of way. Rather, Lewis was referring to the visual stimuli associated with some of the movie’s action scenes as she further described in the Twitter thread: “So, the villain’s weapon of choice in the movie is bright white lights that are at a rapidly flashing/strobing frequency, with the intent to disorient people,” and “one of these scenes lasts over 90 seconds with continuous strobe light, other scenes last anywhere from 5-30 seconds.”

She also explained that:

These scenes are also spread out across the movie and often come without warning. My descriptive audio device warned me about the larger scenes, but other times it was light strobe lights came out of nowhere for no reason.

Indeed, tackiness is not the only reason why more people don’t put strobe lights in their bedrooms. Looking directly at flashing lights can give you a headache, make you nauseous, or even lead to vertigo. Moreover, a study published in the journal Cephalgia found that 38.1% of migraine sufferers lights listed lights as a trigger for acute migraine attacks.

Then for those with what’s termed photosensitive epilepsy, flashing lights could even trigger a seizure, a so-called photic seizure. According to a publication in the journal Epilepsia, a review of the scientific literature determined that “people with epilepsy have a 2–14% chance of having seizures precipitated by light or (a) pattern.” The Epilepsy Foundation of Florida also tweeted out the following warning about the movie: 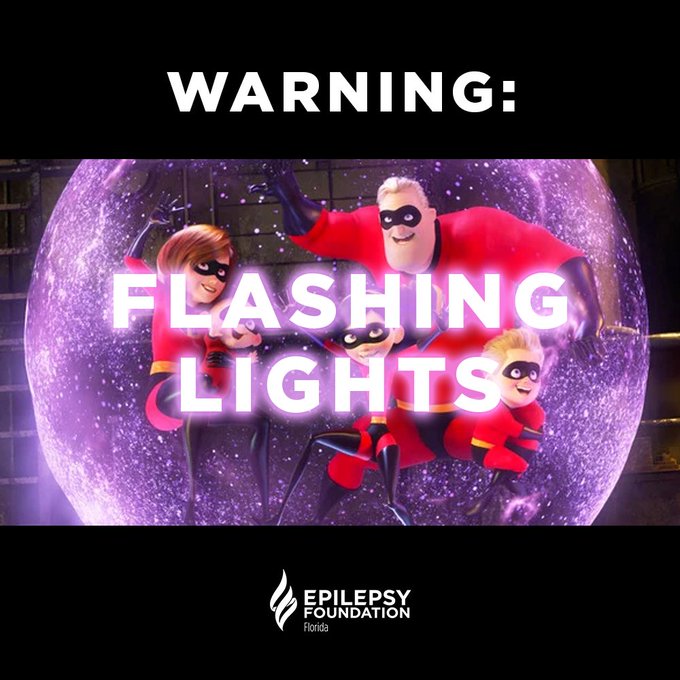 Of course, not all flashing lights are problematic. Otherwise, traffic lights, Elton John’s clothes, and bedazzlers could wreak more havoc than they do. As the Epilepsy Foundation describes, lights that flash 5 to 30 times per second are more likely to trigger seizures. Also, the brighter the lights and the closer you are to the light, the greater the risk. But the thresholds may differ from person to person.

Keep in mind that Lewis’s Tweets seem to be just warnings and not indications that The Incredibles 2scenes have already resulted in adverse health effects. Moreover, Lewis emphasized that she was not telling people to avoid the movie. Her Tweet thread continued by stating:

I am not calling for a boycott of Incredibles 2, or to change the movie. It is very well done, and the strobe lights are an important point in the plot. I just wish Disney/Pixar and theaters alike would issue a warning that the movie contains several scenes with strobe lights

As seen on a subsequent Tweet from Lewis, on Friday, Walt Disney Pictures did send an advisory to theaters showing the movie, asking them to warn customers about the strobe light scene:

Thank you to everyone for retweeting this, writing articles, and signal boosting my message! My goal of having signs at the ticket counter was reached so that people can be warned about the flashing lights in Incredibles 2. pic.twitter.com/JljozWlojd 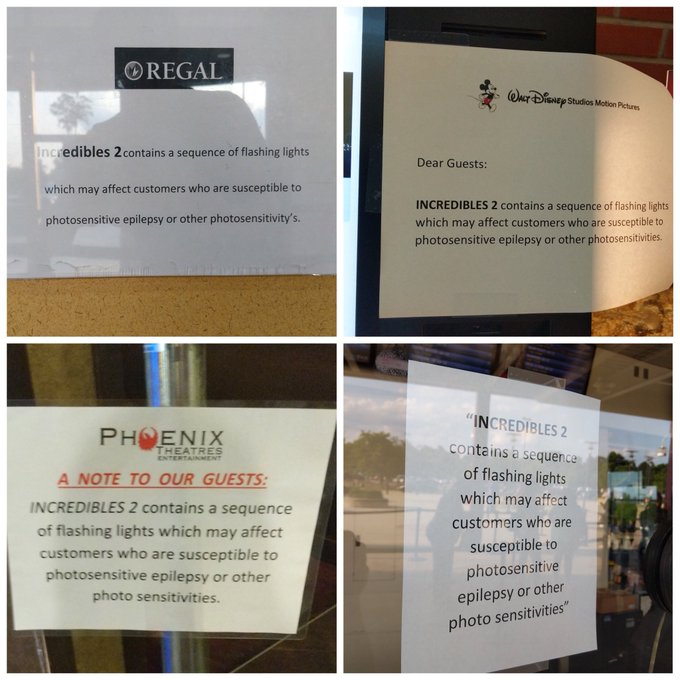 So these days, just because a movie makes you nauseous, doesn’t mean that it has a bad plot or bad acting. The movie industry isn’t what it was several decades ago, when a rubber shark chewing on a boat was considered a stunning special effect. Nowadays, many movies have a lot of visual stimuli, including increasing use of CGI (computer-generated imagery). Such stimuli has been spreading to television, videos on the web, and social media as well. Could all of this result in more “flicker illness,” which is not the excessive use of the photo-sharing platform Flikr, but instead encompasses the ill effects that may occur from viewing something that is flickering?

If you are a film or video maker, you may think that using extensive visual stimuli may generate awe. But make sure that you aren’t accidentally generating “aw $@%^” moments. Ask yourself if such stimuli are really necessary. Before throwing in such stimuli, consider consulting medical professionals to make sure that you aren’t crossing some lines. And if you still decide to use stimuli that could lead to “Flicker Illness,” try to give viewers proper warning such as a alert before the film, a slow build-up to the moment, or a character saying, “I am going to be using a strobe light weapon in T-minus 10, 9, 8…” After all, you don’t want to hurt viewers and have your film or video be no more than a flash in the pan.